Inside six large chest freezers at the Fonterra Research Centre in Palmerston North lies a piece of Kiwi food history.

Unlike most of today’s producers Fonterra sources all of the starters used to make its cheeses from its own library of cultures. This collection of microorganisms dates back to the 1930s and is thought to be a one-of-a-kind in industrial cheese making.

Many are the creations of the former NZ Dairy Research Institute. Its scientists were world leaders in their field, says James Harnett, Executive Manager of the Fonterra Microbial Fermentation Unit. “We are lucky to carry on with their legacy today.”

Among the collection are the cultures used for the Anchor cheese brand, exported to Britain in the hundreds of thousands of tonnes through to the 1970s. Thanks to those New Zealand dairy scientists the culture enabled a maturation process linked to the shipping journey so it arrived in peak condition.

To this day one of Fonterra’s great strengths is making quality cheddar, such as its Mainland brand.

Cheese starter cultures are groups of microorganisms which ferment natural milk sugars into lactic acid which then forms the curds and whey with the help of the microbial rennet.  They also have a huge role to play in the cheese’s flavour and maturation.

Mining older strains for knowledge is familiar ground for the keepers of the Fonterra collection.

Harnett dreams of getting his hands on cheese from the rations left in Antarctica by Robert Falcon Scott, whose Terra Nova expedition of 1910-13 ended in a well-documented tragedy.  Even after more than 100 years, James thinks the cheese has a story that’s yet to be told.

“DNA analysis of that cheese would tell us a great deal and we could even recreate the cheese. It is likely that viruses called phage from that era still exist in the cheese as it has been deep frozen for 100 years. The phage have a specific relationship to the microorganisms used in the starter for the cheese. So if we could extract the phage, we could use it as a tool to find the original starters in our collection.” 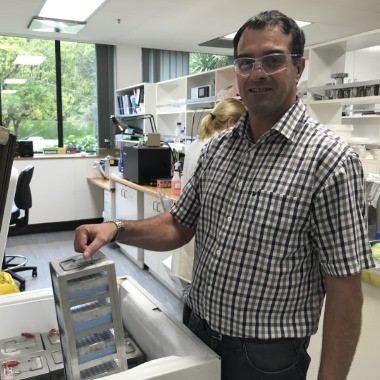 Like Scott’s cheese, Fonterra’s library is a rarity with today’s producers getting their cultures from external suppliers.

“We do the exact opposite,” James says. “We are like a trust in Fonterra making world class starter technology available while achieving the lowest cost of use. As a result each of our cheese plants has a starter room. Our Microbial Fermentation Unit provides 150 ml pottles of culture and from those the staff at the cheese plant will make 50,000 litres of culture.”

Cost is not the only advantage of the unit. The cultures are created in a special sterile environment, and the team’s skills come into play in the fight against bacteriophage – those same viruses that could still be lurking in Scott’s cheese.

Phage, as they’re known for short, are heat resistant viruses found in the air, soil and water. They are harmless to people, but they can attack young cells in starters, slowing the cheese making process, or worse still, destroying the entire culture and leading to “dead” vats.  Using their detailed understanding of phage the Fonterra cheese makers create specific culture mixes so a phage attack will not render them useless.

Again, the starter library is invaluable, with new strains being evolved from older ones as existing cultures become vulnerable to phage attack.

One aspect of the library’s history has not survived. “Up until 1970 strains were named after the Director of NZDRI – or at least their initials,” Harnett says. “The problem was that if a strain got taken out by a phage, the cheese makers would joke that the director was useless.  These days all the strains’ identifiers are four digit numbers.”

We believe there is so much goodness in milk that it's like a true superfood. With every serve providing essential nutrients such as Vitamin B2, B12, calcium, phosphorus and potassium*.