From truck driver to life saver

Our tanker drivers see some incredible and sometimes confronting things when they’re on the road. When Phil Newton, saw a young woman on the edge of a cliff he knew had to do something.

Phil Newton and his cool, calming conversation is credited for saving the life of a young woman, sitting on a clifftop edge at the Arapuni Dam, in the Waikato in May. Because of his selfless actions, Phil has been awarded the prestigious 2018 Truck Driver Hero Award.

“I’d like to think that I have done what anyone else would have done,” says the Reporoa tanker driver. Phil was on his usual 400km tanker route when he saw something unusual. “As I drove over the dam, I looked around and saw a young woman sitting at the top of a cliff. I immediately thought this is someone who looks like they’re wanting to commit suicide.” 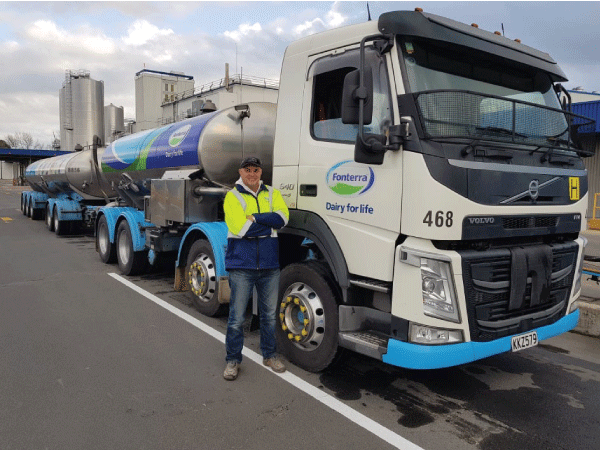 Jumping into rescue mode, he called Fonterra dispatch and asked them to call the Police. “I climbed through the hole in the fence and sat down a few metres from her. I didn’t really want to get too close to the edge myself. I just sat there and chatted to her – asked her what was wrong and said she could talk to me, tell me what was going on and what was going through her head. That kind of thing. When the Police arrived, we were able to get her to back away from the edge, back through the fence and to safety.”

Phil shrugs off the “hero” tag, saying “all I can hope is that there are other people out there who would have done the same thing if they’d seen her.”

I wanted to keep her talking, chatting with me so she wasn’t thinking about throwing herself off the edge. She’d had a pretty tough last year, a few things pushed her over the edge. She was around 23 years old.

Reporoa Depot Manager Stuart Reed nominated Phil for the Truck Driver Hero Award and says that working with Phil for almost seven years, he knows Phil has “always had a real genuine attitude about caring for others and an eye for detail.”

“I think on this day Phil has put all his skills to great use. A true reflection of his integrity. “Phil’s calm approach and the empathy he has for others has meant that she (the young woman) stayed where she was until the Police arrived,” says Stuart.

Where to get help: Need to Talk? Free call or text 1737 any time to speak to a trained counselor, for any reason.

If it is an emergency and you feel like you or someone else is at risk, call 111.