Why short and long-lived greenhouse gases belong in different baskets

Keith Woodford explains why methane and carbon dioxide need to be treated separately rather than being lumped together in a single emissions trading scheme.

A key issue for New Zealand is how to meet the Paris commitments for greenhouse gas (GHG) emissions.

Fundamental to any analysis is the different attributes of long-lived and short-lived gases. In particular, how should methane be accounted for, and how should it be brought into any emission trading scheme?

Back in 2016, current Commissioner of the Environment Simon Upton raised the importance of placing short-lived gases in a different regulatory ‘basket’ from long-lived gases. Remarkably, our rural leaders appear to have failed to pick up on the importance of this issue.

More than any other country in the world, NZ’s gross emissions are influenced by methane-producing ruminant animals. No other developed country has a comparable emission profile, with the arguable exception of Uruguay. 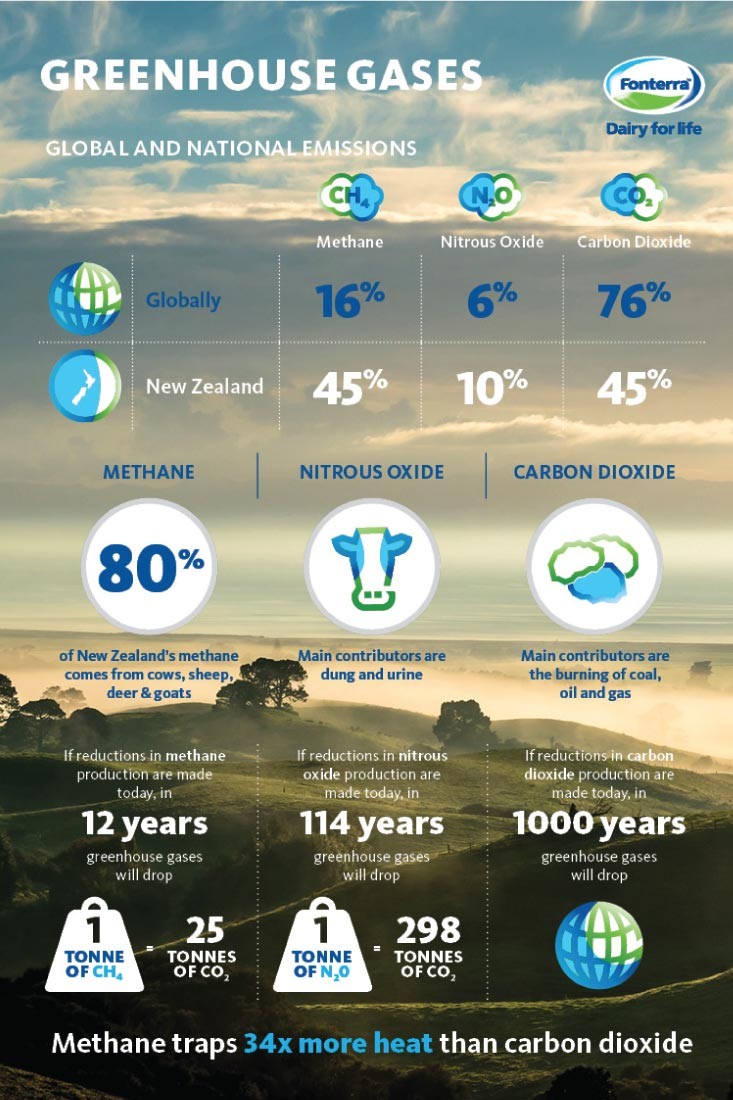 Accordingly, the issue of methane accounting, which is crucial to us, really does not matter to almost everyone else. So, no-one else will lead on this one. It is up to New Zealand to lead the debate.

That means bringing some intellectual grunt to the issue.

At the heart of the issue is the concept of flows and stocks of the various gases.

In the case of methane from all New Zealand sources (but predominantly ruminant agriculture), the flow of emissions into the atmosphere is now lower than 20 years ago, having peaked in 2006 at 35,915 kt of CO2e, declining to 33784 kt of CO2e in 2016.

The other key metric for determining the net flows and pools of methane is that the atmospheric resident time of methane is 12.4 years (calculated, for those who are mathematically minded, as a logarithmic decay function). This means that half of the warming caused by methane as a greenhouse gas occurs within 12.4 years, and about 94 percent within 50 years.

Bringing these metrics together, the current situation for methane from New Zealand sources (largely pastoral agriculture) is that the amount of methane entering the atmosphere is approximately equivalent to the amount that is leaving via conversion to carbon dioxide and then back into grass and related feeds via the carbon cycle.

Given that inflows match outflows, then atmospheric heat sources are being lost as fast as they are being gained.

In contrast, carbon dioxide is largely a stock resource. Every time we produce more carbon dioxide, largely from burning fossil fuels, it stacks up in the atmosphere in amongst all the carbon dioxide that is already there. It takes some hundreds and even thousands of years for the extra carbon dioxide to be dissolved in the oceans or converted into inert forms, such as new coal or oil.

This means that if we keep burning fossil fuels at the current rate, then the world will continue to get hotter. Even if we reduce the burning of fossil fuels, the world will, all other things being equal, continue to get hotter as the stock of carbon dioxide in the atmosphere continues to increase. And even if we stopped all use of fossil fuels, then it would probably be many decades before we would see a meaningful decline of atmospheric carbon dioxide.

And there lies the nub of the issue. Methane from ruminant nutrition is essentially a flow resource, which flows in and out of the atmosphere, whereas carbon dioxide is a stock resource that keeps on building up.

For those who like bathtub analogies, in the New Zealand methane bathtub the tap and the plughole are in balance. For the carbon dioxide bathtub, the tap keeps flowing faster while there is still only a dribble coming out the bottom.

These concepts of flows and stocks are embedded within modelling techniques called system dynamics.

Developed originally in the 1960s by American Jay Forrester, I used these techniques within my own PhD a long time ago – but not quite that long ago! I used them in a biological context, although the principles are the same as is needed to model flows and stocks of GHGs.

Recognition that short and long-lived GHGs need to be considered differently has escaped both policy makers and the general public. Our current Commissioner of the Environment stands out for his recognition of the issue, but he has largely been a voice in isolation.

Nobody likes hearing messages that run counter to prior beliefs, and so I can already hear the howls of protest from those who want to do away with ruminant agriculture in general and the dairy industry in particular. So, let me identify the key counter arguments in advance.

The first attack will be that the carbon equivalent system already takes into account the short-lived gas effect. The answer is that it does indeed do so in terms of comparing the gross emissions over a 100-year period, and this allows for the fact that the methane molecules are rapidly departing from the atmosphere over that time. But it does not take account of the net emissions (inflows versus outflows) and relative heating effects that are occurring at any point in time.

To reinforce that point, what the current measurement system does not do is allow for the fact that methane does its damage quickly and then goes away. In contrast, whatever damage carbon dioxide does is long, drawn out, and irreversible.

There is also a remarkable assumption buried within the current measuring system that we are only interested in the global warming potential for the next 100 years. This is called the GWP100. This means that we effectively capture all of the methane effects but miss most of the carbon dioxide effects because these relate to beyond 100 years.

If we were to measure the relative effects of methane and carbon dioxide over a 500-year time period, then we would be saying that whereas each methane molecule equates to about 28 molecules of carbon dioxide within the GWP100 (the current best estimate), then that number is reduced to around 8 carbon dioxide molecules using a GWP500.

The second argument is likely to be around the issue that, to quote Climate Change Minster James Shaw from a letter forwarded to me by its recipient: “There has been a 2.5-fold increase in global concentrations of methane in the atmosphere since the pre-industrial era”. Clearly, it would seem, we have to do something.

What was left unstated in that letter was that on this global scale most of the methane has nothing to do with ruminants. Reducing methane leakage from oil and gas fields would be a good place to start.  Another source we could work on would be from landfills and associated wastes, plus wastewater, which jointly contribute about 20 percent of the world total.  Rice paddies are also a major source, but there is no current or likely solution to that issue.

The third argument against what I am saying will be ‘ad hominem’. This is a standard approach of attack when someone says something that is controversial. The starting point is to criticise their credentials. As a personal example, way back in 2006 I wrote an article published in Primary Industry Management about this particular issue of 100-year versus 500-year GWP indices. The logic was irrefutable, so instead I was attacked in the media as not being qualified to talk on such matters.

Unfortunately, there is no such things as Queensberry Rules when to comes to environmental politics. And that is precisely the reason that many people shy away from raising their head above the parapet.

In a broader context, I have written about what I (and others) call ‘noble cause corruption’. These are situations where ‘advancing the cause’ is seen to justify one or all of data cherry picking, using data out of context, even fudging of data, and also throwing in some ad hominem attacks. Put simply, it is where desired and supposedly noble ends justify means. The bias can be either conscious or sub-conscious.

The other part of ad hominem attacks is the straw man strategy. This goes along the lines of falsely arguing that the target person holds a particular stance, which is then destroyed as being built on straw. But in reality, the target person did not hold that stance at all; rather it was a twisted version thereof, with just enough truth to be credible to the uninitiated, so as to destroy the credibility of the target person.

So, let me make my own position clear. Within the current context of the Paris Agreement, agriculture emissions are indeed important and that includes methane. Also, agriculture produces another gas called nitrous oxide and this is a long-lived gas. So, in a world that is worried by climate change, agriculture along with others does have to step up to the plate. Fortunately, there are some technologies we can use to nibble away at agricultural GHGs without destroying pastoral agriculture.

In stepping forward to the plate, rural leaders must come to grips with the underlying science and associated GHG issues. These issues are indeed complex. We need to see more intellectual grunt and less emotion.

*Keith Woodford was Professor of Farm Management and Agribusiness at Lincoln University for 15 years through to 2015. He is now Principal Consultant at AgriFood Systems Ltd. Published with the permission of the author.