The sector’s peak body Cooperative Business New Zealand (CBNZ) made the award at a function in Auckland last night.

Shareholders’ Council Chair Duncan Coull, who collected the award, says our farmers should take real pride in this special recognition for their co-op.

“Our farmer shareholders set themselves high standards, and it’s their daily hard work and commitment that drives the success of the co-op. I also want to recognise the energy and contribution of our staff in helping build a co-op that returns such value to shareholders, local communities and the New Zealand economy.”

In making the award CBNZ CEO Craig Presland said Fonterra had achieved a stunning financial turnaround over the past 12 to 18 months.

“With its 2016/17 payout forecast to be at least 50% up on the year before, this injects an additional $3.6 billion into the NZ economy and will benefit many fellow co-operatives significantly.

“Over this period, Fonterra has completed a comprehensive co-operative governance review and raised its profile with the New Zealand public so that it is now better understood as a member-owned co-operative and not a corporate.

“It has also continued to generously support New Zealanders within the spirt of Concern for Community, a key co-operative principle. Its Milk for Schools programme, which is now in its fifth year, is the largest social responsibility programme ever driven by a Kiwi commercial business. The $10.0+ million a year initiative currently benefits more than 140,000 kiwi kids each school day.”

CBNZ represents the growing business sector of co-operatives, mutuals and societies which employ more than 48,000 Kiwis and generates over NZ$43 billion a year in revenues for the NZ economy. That’s almost 20% of this country’s GDP while almost one-in-three Kiwis is currently served by a co-operative, mutual or society as a member.

Jo Finer (GM NZ Industry Affairs) describing what it’s like to work at a co-op. 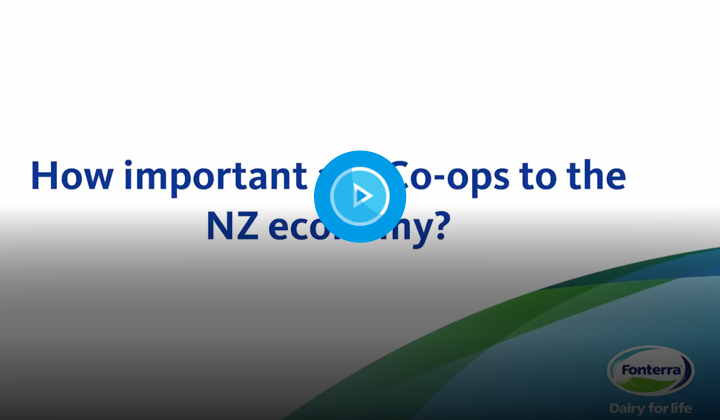