Our farmers are doing valuable work to help improve the environment and this year a few of them were recognised for their achievements at the Southland Community Environment Awards.

Despite being called out for his positive impact on the land, Matt McKenzie doesn’t think his family is doing anything different or extraordinary. 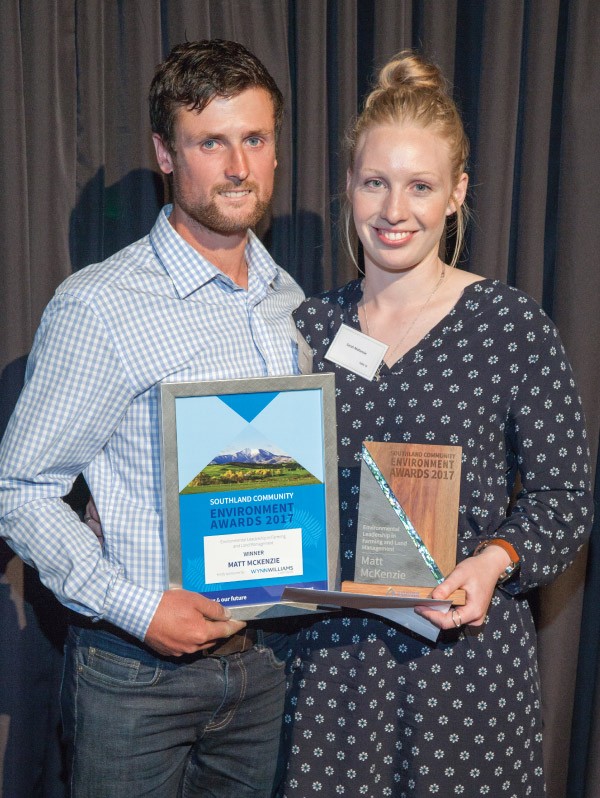 “The majority of dairy farmers are doing a great job when it comes to on-farm environmental work, it’s just that we’ve been fortunate enough to be acknowledged for it.”

Matt takes environmental impacts into consideration with all farming decisions at his Woodlands property. It’s one of the key reasons why he and his wife Sarah switched from twice a day to once a day milking.

Having the cows walk along the race (pathway) only once a day means there is less effluent to dispose of and less effluent runoff from the race.  It also reduces the distance the herd must walk each day.

Since converting the family farm to dairying around three years ago, Matt and his father Eion have put a lot of effort into creating a leafy and profitable legacy for future generations.

Matt has a well thought out plan to get the best from his land, with wide buffers along his fenced waterways to accommodate existing flax and vegetation. Together with his Dad, he’s done a lot of native riparian planting, minimising the impact on waterways by leaving them ungrazed or fenced from stock.

A keen freshwater fisherman, Matt has a really good idea about the condition and quality of waterways across the region. “My interest in water quality covers most areas of my life, so I’m pretty motivated to ensure that rivers are in good shape.”

Conservation is also extremely important to Drummond dairy farmers Graeme and Jan Appleby. The Councillors' Special Award Winners have had a lifetime interest in planting, but they do a lot more than just planting.

In 2012 the Appleby's purchased a block of land near their existing 199 hectare dairy farm. The block includes a 4.4 hectare peat bog which was initially covered in four metre high gorse and other weeds.

A peat bog is a special sort of wetland because it accumulates a lot of decomposing plant material, in the form of peat.

In addition to being great habitats for a range of plants and wildlife, peat bogs are the ultimate carbon store because the carbon from the decomposing plants is locked up in the bog for hundreds of years.  Globally, peat stores twice as much carbon as forests which is one of the reasons why protecting our wetlands is so important.

After consultation with Department of Conservation, Environment Southland, and local iwi during the consent process, the Appleby’s began restoring the peat bog, which now has a QEII covenant.

“The best advice we got was to get rid of the gorse and other weeds to allow the bog to restore naturally, which is happening,” says Graeme.

“If we hadn’t done this, in 10 years’ time the whole area would have been covered and small plants smothered and lost.”

The bog is now home to a delightful variety of flora and fauna.

“It‘s wonderful to see the native orchids, especially Thelymitra cyanea. It’s one of only a few NZ blue-flowering orchids, which only flower for a very short period in January. Australasian bitterns feed in the area and it’s also frequented by bellbirds and tuis collecting nectar from the flowering eucalyptus cordiatas during the autumn and winter.

All up Graeme and Jan have fenced 16 kilometres of streams with buffers and riparian tree plantings. They say the planting is an ongoing project with more planned this year.