A day in the life of… Leon McLaren, Fonterra tanker driver

Leon McLaren has seen it all during his 30-plus-year career as a Farm Milk Collection Operator.

Leon began driving in 1979 with UMT, which later became Bonlac and then Fonterra. Based in Smithton in Tasmania’s North-West, Leon has been delivering our farmers’ milk to the Wynyard factory for 30 years, where we turn it into Gouda and Cheddar cheeses.  Leon is currently a leading hand and training assessor for the Wynyard depot, and in previous years, he also was an owner-operator and a scheduler.

Leon is known for having a heart of gold, always willing to lend a hand and leave you with a smile, and is described by his peers as someone that has made the Tasmanian Farm Milk Collection team into what it is today. 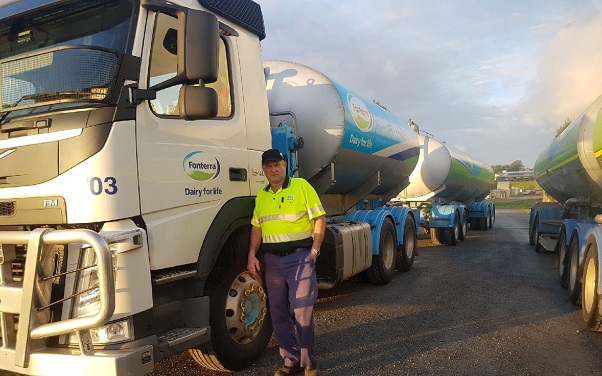 You’ve had a long and varied career spanning 30 years – what are some of the biggest changes you’ve seen in that time?

Probably the biggest change has been in the tankers we drive – they used to have different hoses, and they were a lot smaller. Now we have bigger tankers, there are bigger vats on farm, and better trucks – they’re a lot more comfortable these days! We’ve had plenty of trucks over 30 years – Japanese, American, and European-built. A lot of the guys like the American trucks, but I don’t mind the Europeans – they have a few more creature comforts!

What’s been your favourite role in that time?

I just enjoy the job in general – I’ve done pretty much every job on the FMC team and have enjoyed them all. I took on training in 2006, and I really like passing on the skills to the next generation. I’ll generally spend two weeks with new drivers, showing them the ropes, and it’s great to see them doing well and fitting seamlessly into the team.

In recent years we’ve updated our fleet, introducing the truck and dog tankers to the roads. What difference have they made to your job?

To be honest I wasn’t that keen on them when we first introduced them – I was on a 20m B-double at the time and was happy driving that – but now that I’m on them I don’t mind if I never drive a B-double again. They’re a lot easier to get in and out of farms.

What’s your driving soundtrack? Do you have a favourite song to belt out while on the road?

I usually listen to ABC talkback and the Country Hour, or if I’m not listening to the radio, I’ve got it tuned to country music. I like talkback though because it means I know what’s happening in the world that day, and what’s important to our farmers.

Where’s the best spot in Tassie to stop for a pie or a bite to eat?

Midway between Smithton and Wynyard is the Detention River Roadhouse – although I try to steer clear of the pies! The food is pretty decent, and a bit healthier than your standard roadhouse fare – I’ll get a sandwich or bit of fish if I’m there for a meal, and the coffee isn’t bad either.