Doing Good Together – a partnership to help protect our community

The Stanhope site, which is undergoing an expansion of its cheese plant expansion which will double its size, has donated leftover materials to a local volunteer organisation to help build shelters as part of its Koala Rescue Project.

The Dutch Thunder Wildlife Shelter has been looking after native fauna for six years, and the Koala Rescue Project helps to reduce the threat to the local koala population by building quarantine shelters for infected koalas. 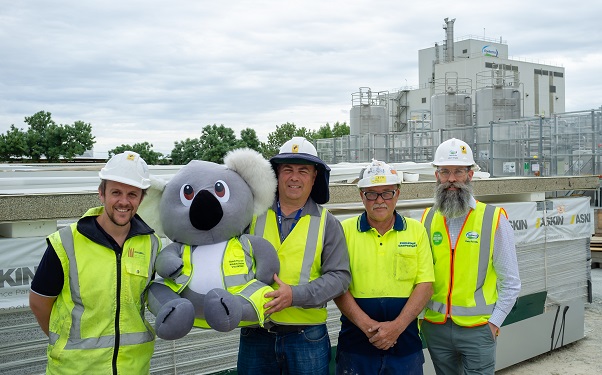 Fonterra’s Stanhope Site Manager Jason Wright says that the site has been a hive of activity for over 12 months, with a 200-strong team of contractors making sure the site is on track to double its cheese processing capability next year.

“With an expansion of this size and the amount of equipment being used, there is always the potential for a lot of waste.

“We’re really focussed on reducing waste where possible, so when the Dutch Thunder Wildlife Shelter approached us for any recycled materials to help build shelters at their centre, we leapt at the opportunity.

“For example, there was around 200 metres of panel left over from our temporary coolroom. These panels are fully insulated and will form a great base for the shelters,” says Jason.

James Leonard from, Dutch Thunder Wildlife Shelter, says that over the past few years, there has been a huge increase in the number of koalas dying in the local area – mainly from sarcoptic mange.

“We’ve had over 100 koalas infected in the last 12 months – that’s an average of one every four days.

“With the number of cases increasing each year, there are concerns that we may lose the local koala population. “We’d love for the community to get behind the project, either by donating their time or materials to build more shelters,” says James.

If you would like to get involved in the project, or know of anyone who may be able to assist, reach out to the team at dutchthunderwildlife@gmail.com.

Doing Good Together – a partnership to help protect our community