As a leading global nutrition company from New Zealand, we are committed to making Sri Lanka a healthier and happier nation.

Over Rs. 32 million from Fonterra to support communities and the Nation in the fight against COVID-19

‘Agility is all the rage’ in today’s workforce, according to Leo Tilman and Charles Jacoby, authors of Agility: How to Navigate the Unknown and Seize Opportunity in a World of Disruption.

“As the Fourth Industrial Revolution barrels forward and the pace of change accelerates, this quality has become widely viewed as a key to long-term survival, performance, and relevance for any organisation. Agility is not some mystical innate quality borne out of fast reflexes and superior intuition, but rather a core competency that can be deliberately developed and relentlessly nurtured at any organisation.”

Forbes’ Steve Dunne also calls out the importance of organisational agility for being top-of-mind throughout 2019, particularly as organisations have to learn how to react to uncertain market conditions when change is the only constant.

Fonterra Brands Sri Lanka’s Human Resources Director, Ms. Dinusha Jayamanne agrees, stating that for an organisation to be future-ready and able to respond to the challenges of constant change, it is crucial to nurture and recognise agility in the leaders that drive the business.

Employees across the dairy supply chain were in the running for honours as part of Fonterra’s Infinity Awards 2019, held recently to recognise inspiring and emerging leaders, amongst 50 other top performing individuals and teams.

Dinusha reveals that post the initial nomination and scoring process, a day-long presentation round for all finalists is overseen by the entire leadership team. For the company’s Inspiring and Emerging leadership categories, a record number of nominations had been submitted.

“Today we have two great success stories of our award-winning leaders, both of whom have demonstrated and nurtured agility in their own authentic ways.”

“Choosing from many strong nominations across the organisation was very tough – but it was great to see the passion in which people were spoken about and everyone’s appreciation of our people leaders,” she said.

“Through this recognition process it’s been very rewarding for me to see the transformation and capability building journey our people have taken and how it has resulted in an immense lift to our talent pool.” 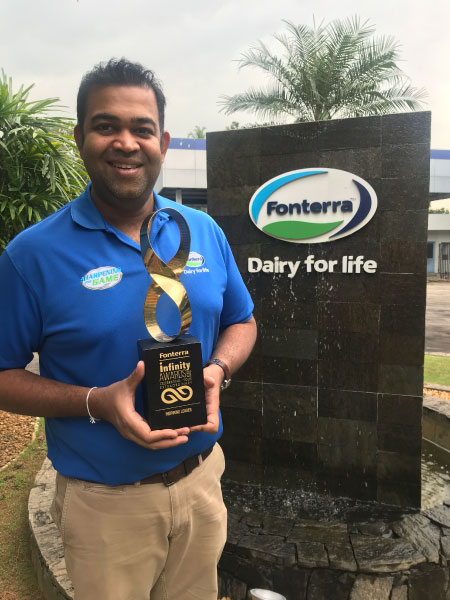 The Fonterra Inspiring Leader award honours an outstanding senior member of the team who has inspired their colleagues to grow, and demonstrated leadership traits, while keeping Fonterra values at the core.

“We congratulate Rehan, who has been a catalyst of change in our future-ready organisation, which has provided so many opportunities for our people to grow. His radical thinking and forensic analysis of solutions have proven to be essential to our people strategy.”

In his time at Fonterra, Rehan has consolidated and expanded his role, and taken up the additional responsibility of being the company’s talent lead. He also took on the entire organisation’s redesign, facilitating greater agility and its heightened ability to thrive in change.

“He is a valued strategic consultant and a great listener – and that’s why our leaders turn to him in seeking diverse perspectives beyond HR. But what stands out is his humility, preferring to support behind the scenes to let our people grow and win – and that is his leadership signature. 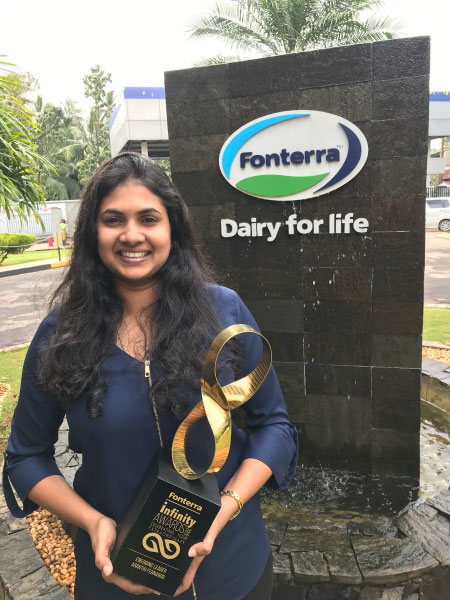 “Congratulations to Aranthi, our ‘Iron Woman’ and Fonterra’s Emerging Leader 2019. As part of our Operations Leadership Team, she brings much diversity in thought and value-addition to our supply chain functions.

“Through her unwavering managerial courage and leadership, we have seen our logistics functions evolve, embrace technology, and its teams flourish through agile career paths.”

“She is a role model for agility and is a natural pick to lead strategic projects with her knowledge of her team’s pulse and her collaborative style of working,” Dinusha said.

Aranthi was the lead for Fonterra’s Vendor Managed Inventory system implementation, bringing together very diverse teams across the supply chain. She was also recognised regionally for her subject matter expertise when she was handpicked for the Co-operative’s SAP rollout in Malaysia.

Over 50 awards were presented at the company’s annual recognition platform across categories such as Food Safety and Quality Innovation, Health and Safety Innovation, Star Performers and Execution Excellence.

Over Rs. 32 million from Fonterra to support communities and the Nation in the fight against COVID-19