Fonterra Australia is on a mission to collect thousands of photographs in the next three months to create a massive photo mosaic wall mural at the entrance to its new Stanhope cheese plant designed to “wear our pride on our side”.

The 30 metre by 5 metre wall mural, with the theme of “Legendairy Stanhope – Proud People, Proud Community”, will celebrate cheese-making history dating back to the 1920s, along with a rural community known for its dairy farms and agricultural abundance.

Stanhope and District residents of all ages are being asked to submit photos that highlight the theme, and every entry received will then be captured forever on the mural. The mural will be unveiled to the community in mid 2017.

Fonterra Australia’s Managing Director, René Dedoncker, says the multi-million  rebuild of the cheese plant and expansion of the Stanhope factory is an opportunity to celebrate a strong community and Fonterra’s place in it.

“There’s a lot to be proud about, from Stanhope being awarded Legendairy Capital of Australia status in 2015 through to the farmers who keep us supplied with top quality milk and our people who make some of the tastiest cheese in Australia. We love being part of a community which represents some of the best qualities of rural Australia.

“We see this as a real opportunity to ‘wear our pride on our side’ in a unique way, bringing together images of people, farms, schools, clubs and activities to make one massive mural. This symbolises what a community is all about – every aspect of it coming together as a whole to make something great. 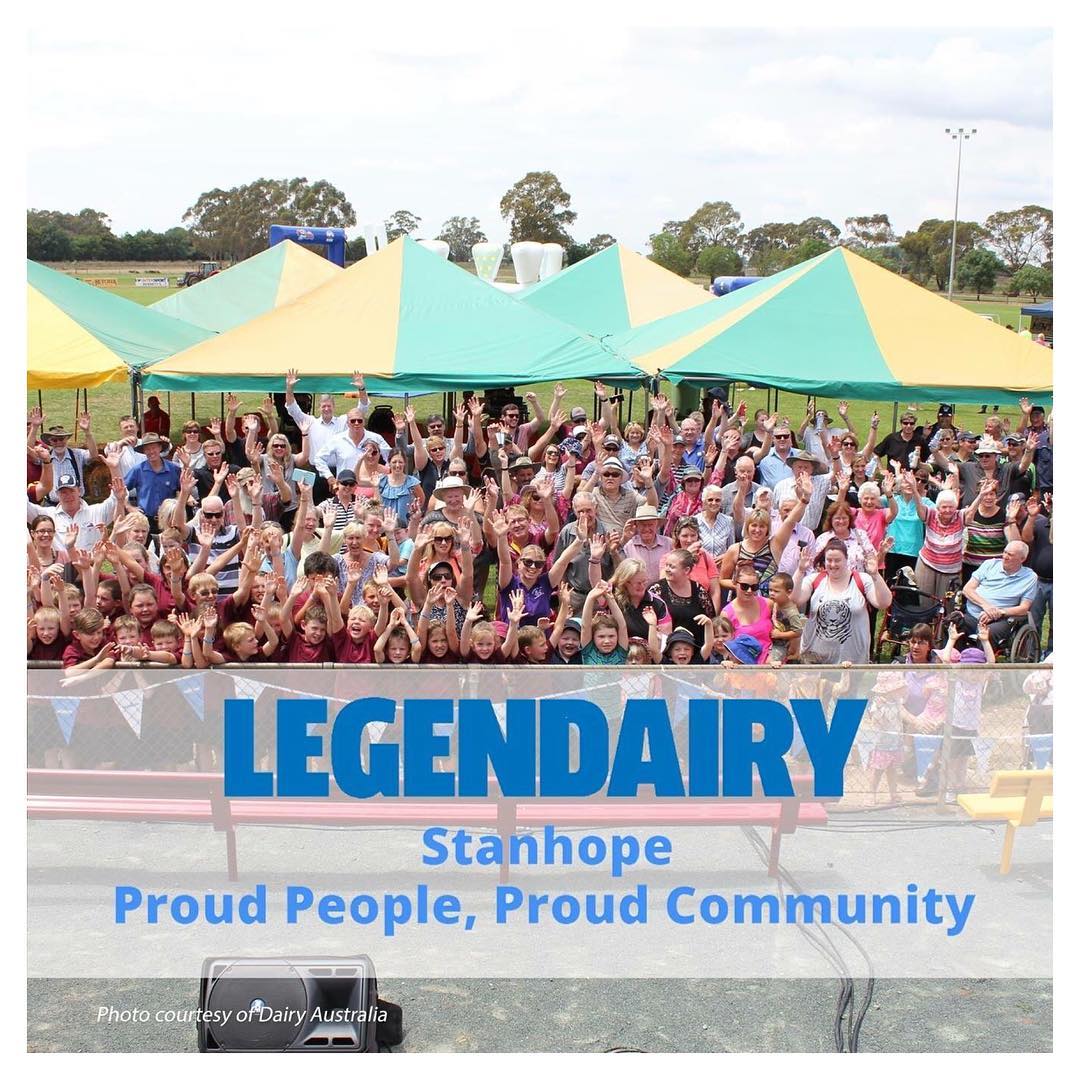 He says, “the Legendairy title not only celebrates the long-established dairy industry, but also legendary local people from Sir John McEwen, Australia’s 18th Prime Minister to all the committee members and volunteers who keep the community thriving through farmers’ markets , schools, senior citizens groups and sports clubs.”

Among the first to get the photo ball rolling is Stanhope dairy farmer Rob Schloss who has been supplying the site for over ten years. “As Stanhope is currently the Legendairy Capital of Australia, the new cheese factory is only going to enhance further, the status of Stanhope as a dairying region. We will be able to lay claim to a state of the art cheese making facility, producing cheeses which will be world class and unique to this region.

He says, “With this new facility, it will help to instil a renewed confidence in the dairy industry in this region going forward, because of the opportunities it will create through more jobs but more importantly for suppliers like myself, the possibility of a better farmgate milk price due to the broader product range the new facility will be capable of producing. As a current supplier, it is a great privilege to be involved in helping to create a mural which will reflect the local community and will be something the local community can take ownership of.”

Cr Adrian Weston, Mayor of Campaspe Shire, has also come to the party with an image of the recently completed Fire Brigade Bell Tower, which he proudly built with locals, Norman Cheong and Bruce Spencer. He says, "This image demonstrates the community spirit that is alive and well in Stanhope, locals pitching together to get a project done for the benefit of a local organisation, in this instance, the fire brigade. I am looking forward to seeing the collection of photos for the mural grow over the coming months to celebrate Stanhope and district."

Dairy Australia is behind the Legendairy Capital initiative, and is also supporting the project by sharing many of the community photographs they have collected.

“We’re delighted to be able to assist Fonterra on this exciting new venture in the Legendairy Capital of the Murray region; Stanhope”, Dairy Australia Program Manager Suzi O’Dell said. “This is an incredible tight-knit community who really support each other through thick and thin, and it will be so good to see many of them represented in this work of art.”

The wall mural will be installed on the northern wall of the Fonterra site and easily seen from the Midland Highway.

On the other side of the wall, Stanhope’s rebuilt plant will be converting milk from some 220 local farms to produce some 45,000 tonnes of cheese per year for domestic and export customers.

So ‘say cheese’ and start sharing your photos now.

How to send in your photographs to be a part of the mural:

•    Submit your photo/s with a short description via the website  www.legendairystanhopemural.com

•    If you want to submit an historic printed photograph that needs scanning send an email message to LegendairyStanhopeMural@fonterra.com

The media partner supporting this community initiative is the Country News.